This year’s Denver Botanic Gardens Summer Concert Series started back in June but, there are still plenty of shows which still have tickets available. Situated in one of the nation’s top botanic gardens, these concerts offer spectators music from world famous acts in two beautiful settings – UMB Bank Amphitheater at DBG York Street and the Denver Botanic Gardens at Chatfield.

What makes concerts here especially fun is the ability to bring in your picnic basic and blanket so you can really enjoy the music. Chairs are also allowed but the chair’s back cannot exceed 26″. A good rule of thumb is if you can role a volleyball under the chair, its probably to high. Food and beverages in sealed plastic or aluminum bottles/cans are allowed but you’ll need to leave the alcohol behind for Chatfield concerts (alcohol available for purchase inside the venue). Click here for more general information about the concerts.

Culture Club on July 20th left concert goers dancing to their hit songs like “Do You Really Want To Hurt Me” and “Karma Chameleon” despite a drizzle of rain at the beginning of the evening. 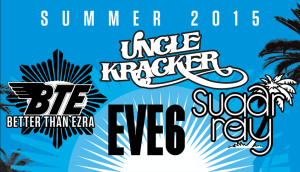 Under The Sun, a summer tour celebrating alternative-pop-rock ‘n’ roll of the 90s, performs tonight at 6:00pm. The star-studded line-up features Sugar Ray, Better Than Ezra, Uncle Kracker, and Eve 6. Tickets are still available so if you don’t have anything planned, make the quick drive over to DBG at Chatfield for a nostalgic night of crowd pleasing music.

Yes + Toto will end the Summer Concert Series on August 20th at the Chatfield location. Tickets are still available.